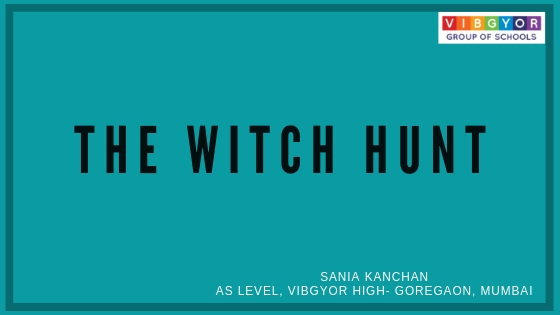 Between February 1692 and May 1693, more than two hundred people in colonial-era Salem, Massachusettes were falsely accused of practicing witchcraft, and 19 of them were executed. More than three centuries later, the Salem witch trials remain one of the most disconcerting and harrowing events in American history and an example of a society was controlled by a perplexingly, enigmatic nature of evil.

Why did Salem’s citizens turn on their own neighbours, and fantasize that they had become minions of Satan and committed crimes that never occurred? Why was Salem’s populace so willing to believe the worst, and why did people not say a word against the colonial officials’ use of breathtakingly cruel methods of torture to extract confessions from the accused?

Fear and religious fervour undoubtedly played a role in the colonists’ fanaticism. As Elisabeth Reis, author of Damned Women: Sinners and Witches in New England explains, the New England Puritans had a “very real dread of the devil,” which they saw as continually waiting to enmesh them and lead them to eternal damnation. Other theories hold that the witch trials were a reaction to stresses that the colonial society was experiencing. In 1689, English rulers William and Mary started a war with France in the American colonies. Known as ‘King William’s War’ to colonists, it ravaged regions of upstate New York, Nova Scotia and Quebec, sending refugees into the county of Essex and, specifically, Salem Village in the Massachusetts Bay Colony. (Salem Village is present-day Danvers, Massachusetts; colonial Salem Town became what’s now Salem.) The displaced people created a strain on Salem’s resources. This aggravated the existing rivalry between families with ties to the wealth of the port of Salem and those who still depended on agriculture. Controversy also brewed over Reverend Samuel Parris, who became Salem Village’s first ordained minister in 1689, and was disliked because of his rigid ways and greedy nature. The Puritan villagers believed all the quarreling was the work of the Devil. But regardless of the cause, the Salem Witch trials provide unsettling historical proof that it doesn’t necessarily require a Hitler, Osama bin Laden or Charles Manson to perpetrate horrifying evil. To the contrary, they suggest that unexceptional, seemingly rational and moral people are capable of committing or supporting cruel injustices as well.

In January of 1692, Reverend Parris’ daughter Elizabeth, age 9, and niece Abigail Williams, age 11, started having “fits” and the local doctor blamed the supernatural. Another girl, Ann Putnam, age 11, experienced similar episodes. On February 29, under pressure from magistrates Jonathan Corwin and John Hathorne, the girls blamed three women for afflicting them: Tituba, the Parris’ Caribbean slave; Sarah Good, a homeless beggar; and Sarah Osborne, an elderly impoverished woman. Two of them claimed innocence while the other one confessed of being a witch. All three women were put in jail. With the seed of paranoia planted, a stream of accusations followed for the next few months. Dozens of people from Salem and Massachusetts were brought in for questioning. Eventually, William Phipps, the Governor of Massachusetts Bay Colony, created a special court to hear witchcraft cases. Its five judges—three of whom were friends of Mather—used methods that today would seem bizarre, such as compelling a defendant to touch one of the supposed victims, to see whether it stopped the demonic symptoms. They also accepted as evidence gossip, rumours and tall tales—such as one man’s claim that he had witnessed a suspect transform herself into a cat. The trials were so clearly rigged and based upon concocted evidence that even Mather felt compelled to complain. “It were better that ten suspected witches should escape than one innocent person be condemned,” he wrote in a letter to the governor. Eventually, after Phipps’ own wife was accused of witchcraft, he apparently conceded the farcical nature of the proceedings, and in May 1693, he pardoned all those who had been imprisoned on witchcraft charges. But the damage had been done: 19 were hanged on Gallows Hill, a 71-year-old man was pressed to death with heavy stones, several people died in jail and nearly 200 people had been accused of practicing “the Devil’s magic.”

In the 20th century, artists and scientists continued to be fascinated by the Salem witch trials. Arthur Miller resurrected the tale with his 1953 play “The Crucible” using the trials as an allegory for McCarthyism paranoia in the 1950s. Numerous theories have been devised to explain or understand the strange behaviour that occurred in Salem. One of the most concrete studies, published in Science in 1976 by psychologist Linda Caporal, blamed the abnormal habits of the accused on the fungus ergot, which can be found in rye, wheat and other cereal grasses. Toxicologists say that eating ergot-contaminated foods can lead to muscle spasms, vomiting, delusions and hallucinations. Also, the fungus thrives in warm and damp climates—not too unlike the swampy meadows in Salem Village, where rye was the staple grain during the spring and summer months.

What is very frightening about the Salem witch trials is how it highlighted the dark side of human nature which has depicted itself in history again and again like in the form of the anti-communist witch hunt in 1950. They also show how seemingly rational, moral people can be induced to support wrongs or even perform them, if they fail to contemplate the nature of their deeds–a notion that philosopher Hanna Arendt called “the banality of evil.”

This suggests that no matter how much we have advanced, there’s always a chance that the horror of the Salem witch trials may repeat itself.