A bike future ahead 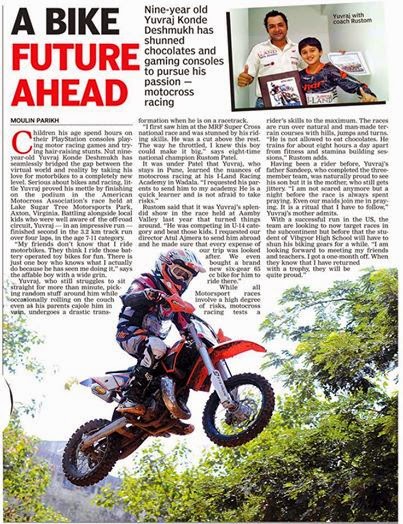 Children his age spend hours on their PlayStation consoles playing
motor racing games and trying hair-raising stunts. Nut nine-year-old
Yuvraj Konde Deshmukh has seamlessly bridged the gap between the virtual
world and reality by taking his love for motorbikes to a completely new
level. Serious about bikes and racing, little Yuvraj proved his mettle
by finishing on the podium in the American Motocross Association’s race
held at Lake Sugar Tree Motorsports Park, Axton, Virginia. Battling
alongside local kids who were well aware of the off-road circuit, Yuvraj
in an impressive runfinished second in the 3.2 km track run over four
laps, in the age 7-11 category.
“My friends don’t know that I ride motorbikes. They think I ride
those battery operated toy bikes for fun. There is just one boy who
knows what I actually do because he has seen me doing it,” says the
affable boy with a wide grin.
Yuvraj, who still struggles to sit straight for more than minute,
picking random stuff around him while occasionally rolling on the couch
even as his parents cajole him in vain, undergoes a drastic
transformation when he is on a racetrack.
“I first saw him at the MRF Super Cross national race and was stunned
by his riding skills. He was a cut above the rest. The way he
throttled, I knew this boy could make it big,” says eight-time national
champion Rustom Patel.
It was under Patel that Yuvraj, who stays in Pune, learned the
nuances of motocross racing at his I-Land Racing Academy in Wadala. “I
requested his parents to send him to my academy. He is a quick learner
and is not afraid to take risks.”
Rustom said that it was Yuvraj’s splendid show in the race held at
Aamby Valley last year that turned things around. “He was competing in
U-14 category and beat those kids. I requested our director Atul Ajmera
to send him abroad and he made sure that every expense of our trip was
looked after. We even bought a brand new six-gear 65 cc bike for him to
ride there.”
While all Motorsport races involve a high degree of risks, motocross
racing tests a rider’s skills to the maximum. The races are run over
natural and man-made terrain courses with hills, jumps and turns. “He is
not allowed to eat chocolates. He trains for about eight hours a day
apart from fitness and stamina building sessions,” Rustom adds.
Having been a rider before, Yuvraj’s father Sandeep, who completed
the three-member team, was naturally proud to see his son but it is the
mother, who still gets jittery. “I am not scared anymore but a night
before the race is always spent praying. Even our maids join me in
praying. It is a ritual that I have to follow,” Yuvraj’s mother admits.

With a successful run in the US, the team are looking to now target
races in the subcontinent but before that the student of Vibgyor High
School will have to shun his biking gears for a while. “I am looking
forward to meeting my friends and teachers. I got a one-month off. When
they know that I have returned with a trophy, they will be quite proud.”